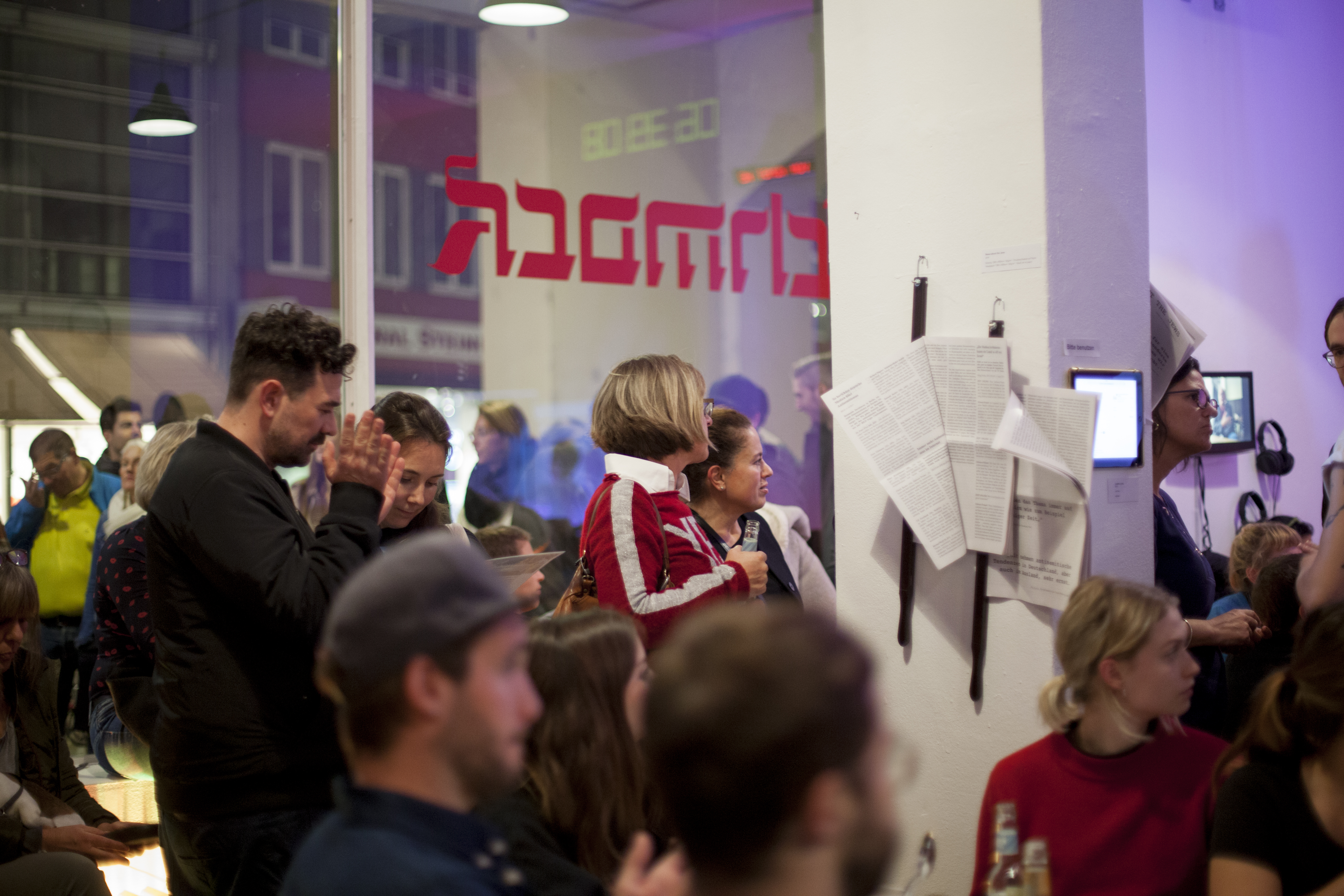 „… what remains with you after this dazzling evening is as one of many thoughts a despair about indelible, dangerous, stupid hatred.“ Egbert Tholl, SZ

The Munich restaurant Schmock combined upscale Israeli cuisine with an ironically provocative approach to German-Jewish history. In 2016, the owner decided to close his store due to mounting anti-Semitic hostility.
Still and especially now, in the context of right-wing populism that is becoming more open and louder, this is a case that makes one think about how society deals with everyday racism as well as open and concealed resentment.

The twelve-hour performance challenges the model “Restaurant” as an apparently harmless hinge between cultures. As a matter of course we go to the „Italian“, „Vietnamese“ or „Greek“; international cuisine acts as an inexpensive and non- binding entry ticket to other cultures. But what happens if you don‘t follow the rules; the „exotic“ dishes don’t get served in bite-sized nibbles, but as hard-to-digest food, to the point of inedibility, seasoned with all the clichés and prejudices to which we all do underlie, whether we like it or not? What “is allowed” gastronomy and the marketing of “foreign” dishes and cultures in the social consensus and what not. Do we „allow“ a restaurant to cross the boundaries of folkloric depiction of common ideas and clichés of the respective cultural area and provocatively join the discourse on racist reservations in society?

The work Schmock II stages the reopening of the restaurant: visitors have the opportunity to take a seat, choose between various dishes and drinks, to have a chat. The harmless, unbiased setting is gradually disrupted by various performative and installative elements.Live broadcast from Israel‘s first Bavarianrestaurant, „The Bavarian Brasserie“in Tel Aviv, shows the reflection of aBavarian restaurant in Israel within a (sta- ged) Israeli restaurant in Bavaria, thus enabling a double view of staged culture. Anti-Semitic statements from social media as well as concrete insults against the restaurants Schmock and Feinberg’s (Berlin) are taken up as documentary material and processed artistically. At a round table, invited guests, including Bavarian TV chef Fritz Häring, sociologist Prof. Paula-Irene Villa (LMU), Levi IsraelUfferfilge (Rent a Jew) and journalistand author Sabine Zaplin, discuss the political power of food: when does a meal separate? When does it connect? Who owns who’s cuisine, who appropriates?Visitors are asked to decrypt the amount of information during their visit at the restaurant and thus deal with the complex matter and form their own opinion on the subject, while the space changespermanently until it is finally cleared outand – once more – disappeared completely. The deconstruction of the place plays with the relationship between constructed identities and the social experience that actually takes place on site. The empty space in turn offers the potential to rethink cultural gatherings and to understand reproductive processes during the „export of cultures“.